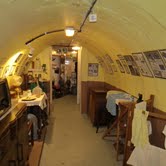 Some tourist attractions are a little out of the ordinary. Standing at the top of a flight of steps leading down into the tunnels of a spacious air raid shelter beneath a school playground , it is hard not to experience a shiver when you remember why it was built. How the children, clutching their gas masks, with sirens wailing, would have been hurried underground by their teachers. Neither adults nor their charges would know what sights of devastation would greet them when the all-clear sounded and they could return to the surface and their lessons.

Surrounded on all four sides by streets of red brick terraced houses, Clifford Road Primary School in Ipswich, Suffolk, is a large school typical of those built in the Edwardian era.  It was in 1989 that workmen excavating a school pond removed a few concrete slabs and made their surprising discovery. They had uncovered the long forgotten air raid shelter built to house 200 children, teachers and local residents, when war began in 1939. When debris was cleared away, the amazed builders discovered a dry shelter that looked as it had the day the entrance was thankfully covered over.

In a tiny garden, alongside some Dig for Victory raised beds, and an Anderson shelter, the entrance to the shelter is now hidden behind a sitting area at the edge of the busy school playground. ….