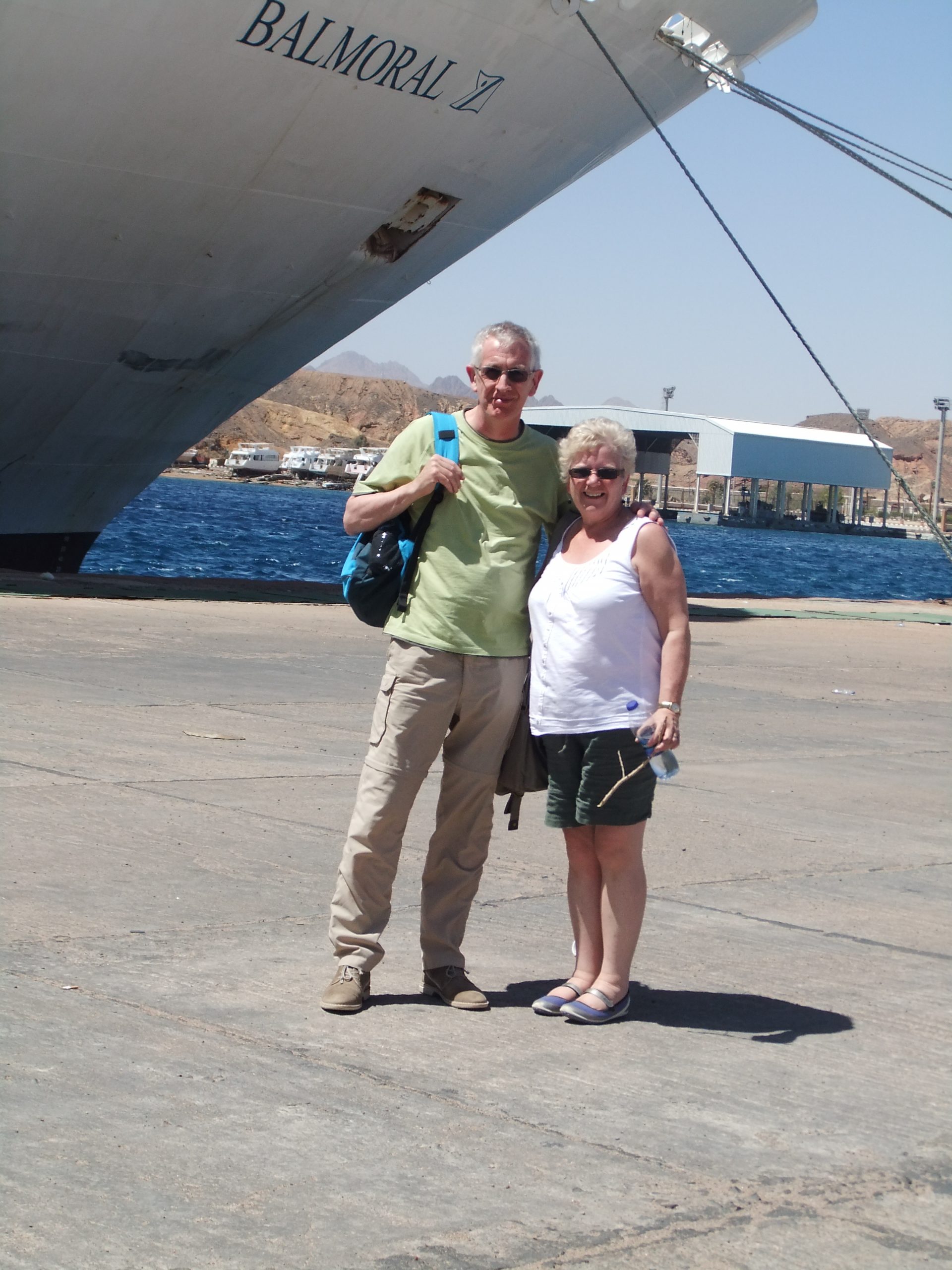 Diary of The Cruise: A Life at Sea- Dubai to Southampton

As Rachael Jackson, Fred.Olsen's PR manager, hadn’t disembarked when we arrived from the UK, we all dashed around the ship meeting key people on board.  Jetlagged, I promptly forgot just about everyone but luckily Kevin has a much better memory for faces. Then we were on our own to supervise a film crew!

Attended deck drill and “safe haven” drill (as we were to be sailing through the pirate waters) then met Colin and as, the BBC Executive Producer, Jules, had headed back to the UK to begin editing, the remaining members of the BBC team,  Mike, Stuart and Laura-Jane.

The first heavy rain in several years flooded the souk and sent us rushing back to the ship for sail-away – and our first experience of one of Colin’s services, one of 18 we attended aboard.

As Kevin was available for filming, I joined Sue’s Singers, and started to learn the words and moves to songs from Grease, which was to be the choir’s final concert later in the cruise.

Ashore for a half –day “Arabian Heritage” excursion, then filming the sail-away party on deck.

A service, a meeting to plan filming the“all-rounders” lunch,  and a Women’s Institute meeting with Colin as the speaker. It was slightly surreal to be at a WI meeting on a ship with the temperature outside 31 degrees!

Filming the All-rounders Lunch – and the only complaint was from one passenger who wanted to know why he hadn’t been filmed yet!

Many passengers volunteered to help at the Country Fair, and I am sure the TV cameras were not the only reason!

A Pirate Party on deck celebrated clearing the pirate area without mishap, although I suspect the BBC would have loved some “action” to film.

As Colin wasn’t being filmed we enjoyed three amazing excursions. Petra, hot and crowded, but the long coach journey and three hours of walking were worth it to see the ancient city, carved into the sandstone. The temples of Luxor and Karnak, with towering pylons, obelisks and avenues of sphinx and then a four-wheel drive into the Sinai desert to meet the nomadic Bedouin tribes.

In Egypt the tourism police, provided for the coaches, and the poverty seen in the cities, were a hint of the problems that Egypt would face just a few weeks after we returned to the UK.

In a convoy of ships, most passengers were out on deck watching Egypt slip past, listening to the commentary provided by the head of public relations for the Suez Canal and the Chief  Pilot, aboard for that reason.

Our most memorable day and a big day for Colin as he was to give a short Service of Remembrance at the War Graves Commission cemetery at El Alamain. Two coachloads of passengers, drove for two hours following the sea road. We passed mile upon mile of deserted half- built resorts, thousands of holiday apartments and hotels: a sobering reminder of the sad state of the Egyptian economy.

At the cemetery, Colin laid the wreath,  and we walked on the baked sand, past rows of gravestones, to the tiny octagonal chapel for a short service, remembering the soldiers buried at El Alamain. One of the passengers had served there, and was returning to the grave of his friend. We all kept a kindly eye on the 94 year old; the honoured member of the party.

After poems and prayers the short service ended with Dom ? the singing waiter from Balmoral, singing “Let There Be Peace on Earth”, his unaccompanied tenor voice soaring and echoing around the chapel

Returning to the ship the film crew ventured into the city to film some background shots of the market. Although most local people were friendly and fascinated by the TV camera, the underlying atmosphere of poverty and desperation sent us quickly back to the ship.

The passengers who had been to Cairo and the pyramids reported similar scenes there and all agreed that, although delighted to have seen the amazing historic sites, we could appreciate the concerns about the future of Egypt.

Four days at sea with plenty of food and entertainment. Kevin missed some sleep as the BBC filmed the ship at night, but the big event was the annual Country Fair to raise money for the ship’s adopted orphanages in Thailand and the Philippines.  As the BBC dashed around filming stalls and sideshows, Colin caused great hilarity as one part of a “human fruit machine” .

Accompanied by dolphins we sailed into Gibraltar, the last port of call on the cruise,   then back on board for the final stretch at sea – with everyone starting to think of home.

There were goodbyes to film, as well as performances and exhibitions. The art class and craft club produced their work, the drama group performed their improvised play and Sue’s Singers performed songs from Grease. As the temperature outside dropped and the odd shower threatened, the Neptune Lounge (the theatre) filled with cheering and clapping supporters. After taking 90 services, Colin was filmed packing away his vestments, communion wine and hymn sheets.

Filmed with the captain and pilot from the bridge, Southampton appeared through the mist. In a flurry of goodbyes and pledges to meet again, Hundreds of satisfied passengers, including the 375 “all-rounders” who had been on Balmoral for 112 days, gathered their suitcases and souvenirs and disembarked. Colin was filmed getting into his taxi heading home to Brighton… and the ship’s crew got ready for the new passengers who would be boarding a few hours later.

Crew members and passengers are looking forward to seeing what the BBC will show of their journey in 2013.