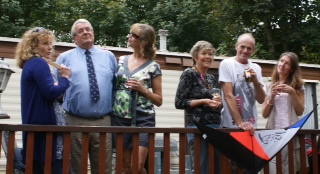 Anyone who is a fan of caravan holidays will enjoy the latest production by Framlingham  Amateur Dramatic Society (FADS), but anyone who has had one such vacation and vowed never to return, will probably enjoy Third Week in August, by Peter Gordon, even more.

Overlooking the beach, the grassy cliff-top caravan site is where Neville (played by Peter Turner) and his wife Mary (Claire Harries) are enjoying their 23rd  or 24th annual holiday, disagreeing over the exact number, as they bustle about ensuring the sites rules are followed by first-timers Tony (Glenn Hurlock), his children (unseen) and his girlfriend Jenny (Jane Manning), a very reluctant caravanner who spends most of her holiday sitting in the awning of their caravan, reading novels, teasing Neville and complaining about how bored she is.  Opposite is the rented caravan of kindly Sue (Alison Podd) who is spending two weeks people-watching and attempting to write a play. Into the mix of misunderstandings, imagined holiday romances and enforced jollity comes Liz (Kathy Churchill), Mary's sister, recently divorced, stretched to breaking point by her overpowering sister and on the prowl for a new man.

Tony and Mary are the archetypical experienced caravanners. His toolbox is equipped for any emergency, even super-glue to mend Sue's broken finger nail (and yes, they do get stuck  together). Mary strides around the campsite in her shorts and wellies, carrying a towel that conceals a toilet roll, and undermining her husband, who always calls “The Wife”.   Divorced dad, Tony, loving his holiday with his children, happily breaks the rules by flying his kite, makes jokes and fails to realise that his friendliness to his fellow holidaymakers could be misinterpreted.

The play took a little time to warm up but the audience was soon chuckling over the antics of bumptious Neville, his annoying wife, and the strained relationship between the two siblings. Easy-going Tony is the innocent who wants to be everyone's friend – and gets to do all the kissing on stage!

The jokes may be easy to foresee, but the setting of the play, complete with a real caravan, is very successful and the experienced FADS actors make the most of their characters and the lines written for them. I wouldn't  want to share a caravan holiday with them, but an evening at the Headmaster Porter Theatre at Framlingham College was fine!