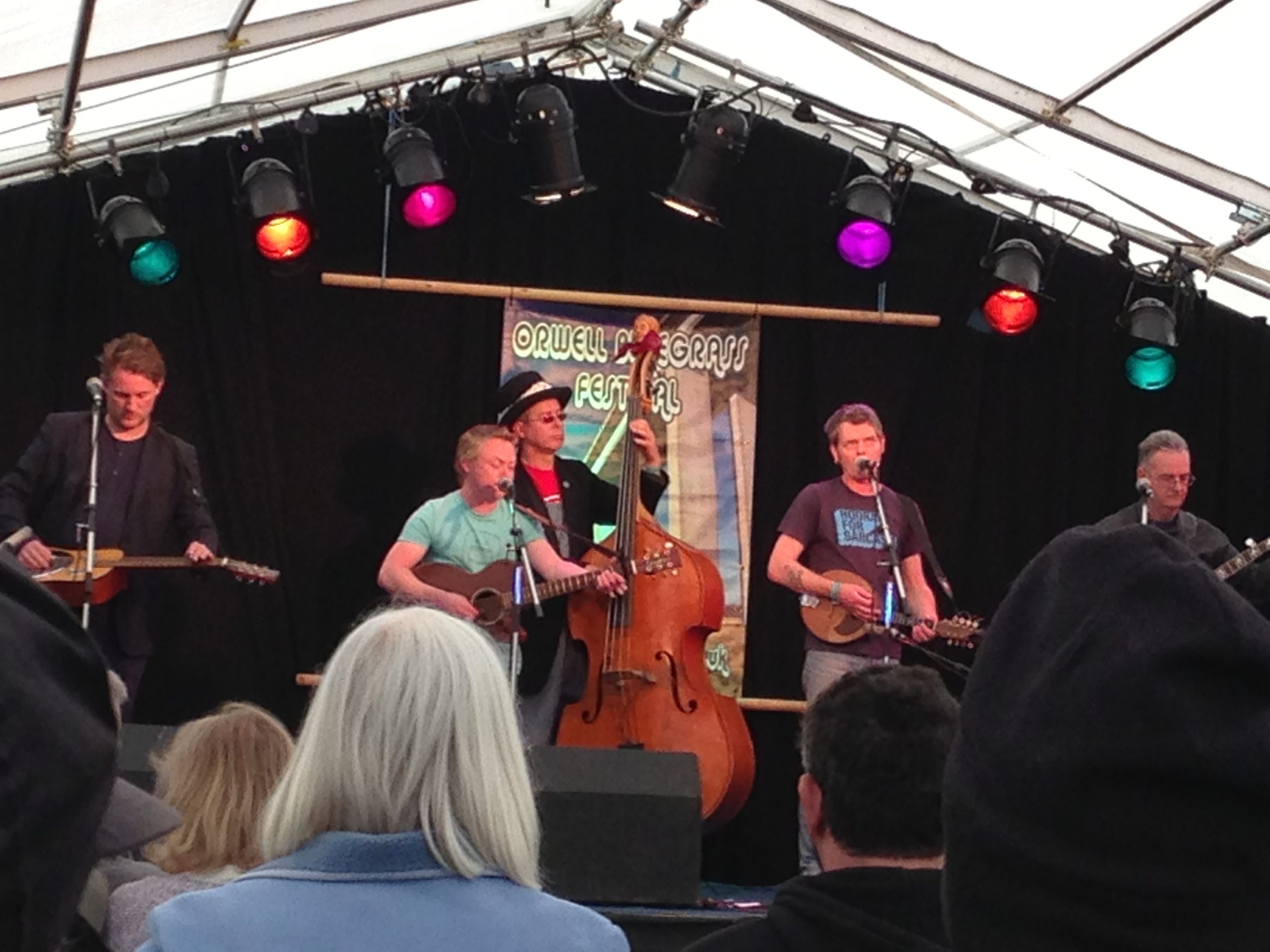 I think it is probably one of Suffolk’s best kept secrets. Every May, for one glorious musical weekend, a festival for Bluegrass fans is held near Ipswich. Hundreds of people arrive with their tents or caravans and enjoy both listening and performing the sort of music that gets your feet tapping and puts a smile of your face.

It was a chance comment from a friend, David Forsdike, who plays the mandolin in The Drowleys, a bluegrass band,  that led to my discovery of the festival. I had heard and enjoyed the bluegrass music David and his friends played, but had no idea that every year for the past seven years, Suffolk had hosted a festival of music. Every May, at Hallowtree Scout Campsite near the Orwell Bridge, marquees are erected, sound and lighting systems installed and performers come from across the UK and America, to share their love of the music that developed in the States, from the folk music of the early settlers who came from Britain.

David had told me about the Sunday morning jam session where the festival goers are joined by day visitors who can, if they wish,  bring along their instruments and  join in with the gospel music the professionals play. I don’t play any instruments but I like new experiences and this sounded fun, so I arranged to meet David at the festival.

‘This type of music is extremely popular in East Anglia,” explained David, “and it’s very convenient to get to for lovers of Bluegrass in this area.’

The popularity of the event was apparent from the queue of day visitors paying their £15 entry fee (a full weekend, with camping, is just £50) at the entrance to the main scout building, which serves as the administration centre of the festival. As we waited we heard, from behind the closed doors of meeting rooms, the performers rehearsing. Outside were the beer and refreshment tents and two marquees – one for Old Time music and the other larger one, the Main Stage, where preparations were underway for the gospel session.

Gradually the audience arrived and filled the rows of wooden chairs and, onstage, the musicians, who had been performing their usual sets over the weekend, tuned up. With lively hymns, and slow thoughtful gospel songs, they combined into an impromptu jam session of old gospel songs such as May the Circle, I’ll fly away and Angel Band. When the initial shyness wore off, many in the audience produced their instruments from the cases they had half-hidden under their seats and joined in playing and singing. There were many songs I didn’t know as well as a few I did, but it was inspiring to sit and listen to  people of all musical standards come together to play just for the sheer joy of it.

When the gospel session ended, the programme of musicians continued and we wandered between the two marquees enjoying both modern interpretations of  bluegrass music and the Old Time music, some of which was accompanied by clog-dancers.  This part of the festival is supported by the organisation, Friends of Oldtime Music and Dance. (OAOTMAD).

This year will be the 8th Orwell Bluegrass Festival, which was begun by the late Ralph Keeble, to whom this year’s festival is dedicated. From humble beginnings it has grown and the 46 acres of parkland and woods by the River Orwell makes a perfect setting. The marquees are set around a square making an intimate setting where, between sets, people just sit on the grass and play… and others join in.

“No matter how good you are, you will always be welcome to join in and enjoy yourself,” David reassured. .

This year, the line-up for the Orwell Bluegrass Fetival include  Jaywalkers, Biggin Hillbillies,  Blossom Hill Bluegrass Band,   Ragged Out String Band and New Essex Bluegrass Band. The organisers are also very pleased that Tumbling Bones and Audrey Auld & Mean Mary will be travelling from the USA to perform at the festival but there are also Open Mike sessions where festival goers can book themselves a slot to perform.

I may not know anything about Bluegrass music but with the sun shining, a glass of beer, a picnic and some friendly people, it was certainly an experience I wouldn’t have missed.

This years Orwell Bluegrass Festival is on 9th/10th/11th May. More details can be found on their website www.orwellbluegrass.co.uk

Bluegrass music is considered a form of American roots music with its own roots in English, Irish and Scottish traditional music. The name of the genre is derived from the Blue Grass Boys, the name of Bill Monroe's band. It has been inspired by immigrants from the British Isles, as well as the music of rural African-Americans, jazz, and blues.

Like jazz, bluegrass is played with each melody instrument switching off, playing improvised solos in turn while the others revert to backing. Bluegrass relies mostly on acoustic stringed instruments. The fiddle, banjo, acoustic guitar, mandolin, and upright bass are sometimes joined by the resonator guitar. Instrumental solos are improvised, and can frequently be technically demanding. At times the musicians may perform gospel songs, singing four-part harmony and including no or sparse instrumentation.

Besides instrumentation, one of the distinguishing characteristics of bluegrass are the vocal harmonies featuring two, three, or four parts and an emphasis on traditional songs, often with sentimental or religious themes.

This article first appeared in the May 2014 edition of Suffolk Norfolk Life, available in shops and online.  http://www.suffolknorfolklife.com/