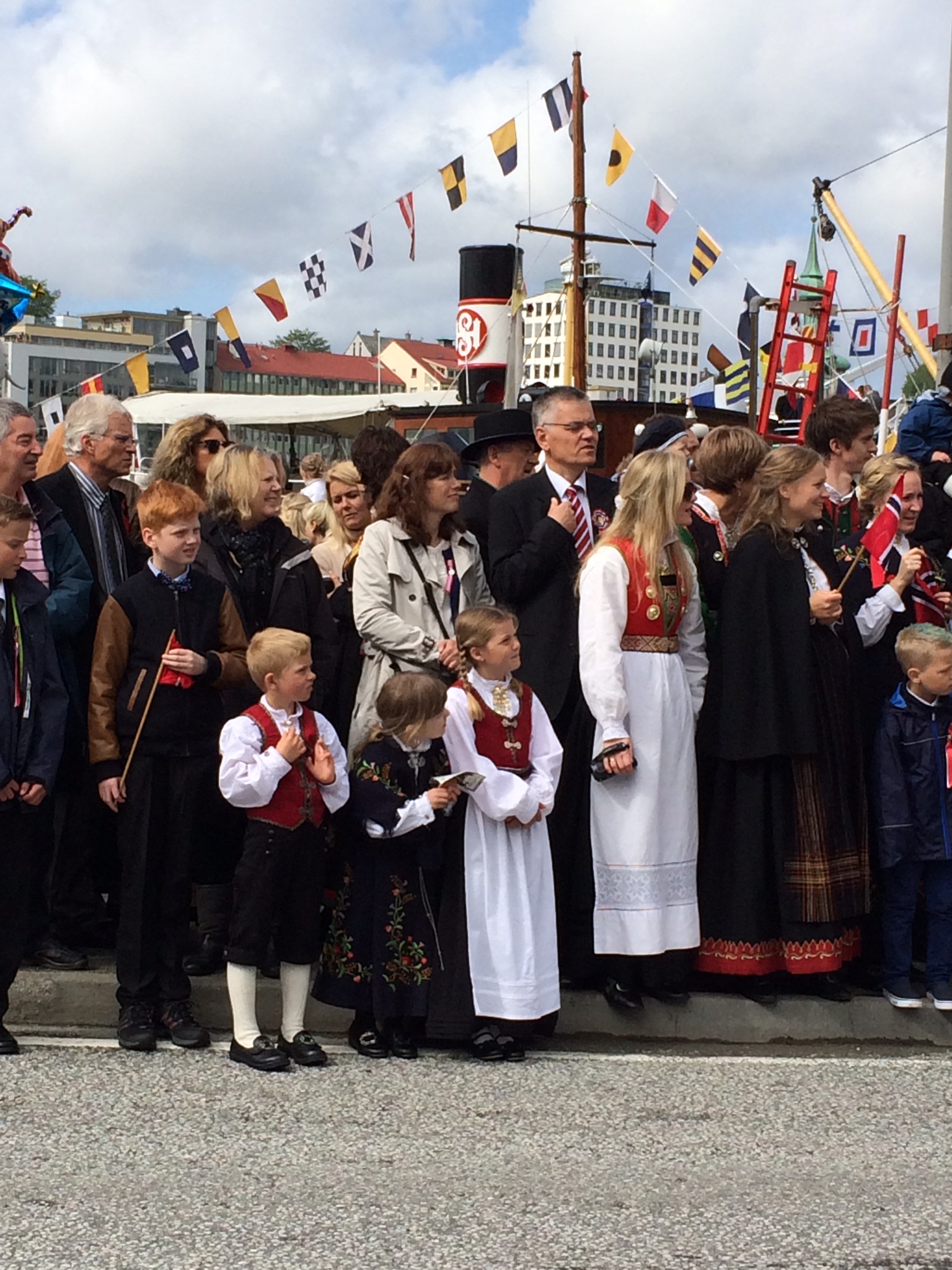 It was very special to be in a Norwegian city on the day they celebrated the 200th anniversary of the signing of their constitution, when they became an independent nation.

Our cruise ship, the MS Braemar, is Norwegian, as were some of the crew. We were sailing the stunning fiords of Western Norway and Bergen was our port of call on 17 May 2014, a perfect day for eight hundred or so passengers to join the celebrations of a national holiday. Thousands of local people of all ages, dressed in their national costume, or “bunad”, paraded through the streets in a procession that lasted two hours. An annual event, this year's celebrations were to be particularly important and flags were hung from apartment balconies, shops and offices. This was a day for Norwegians to be proud of Norway and its history.

In the parade marching bands, and drumming groups, accompanied war veterans, firefighters, dignitaries and representatives of every Bergen club and organisation (from dance schools to judo clubs, BMX bikers to gymnasts) as well as students  from schools, colleges and universities.

“It is a day for the children really and every school will take part” explained Capt. Bent Ivar Gangdal, the Master of MS Braemar. “Every town and village in Norway will be celebrating with parades and parties today.”

The bunad worn reflected the region of Norway that the wearer originated from, and the embroidery and colours sometimes also showed the wearers marital status, trade or profession. Many bunad were treasured family heirlooms, passed down through the generations, (I was told that a new set could cost £5,000). Toddlers and babies lay sleepily in their pushchairs, looking incredibly cute, dressed in outfits that matched those worn by their parents. Older children ran about, happily getting under everyone's feet, in a dressing up game that was being played by every generation. Beautiful girls and handsome boys had left their teenage jeans and hoodies at home to parade unselfconsciously through their home city dressed in a flowing skirts, aprons and bonnets, or knee length breeches and waistcoats.

“The women and girls have always dressed in traditional clothes but the men are doing it more now too,” explained Capt. Bent Ivar Gangdal, who met up in Bergen with his wife and three year old daughter, who was dressed in the costume of her grandmother’s village.

Those boys and men without traditional costumes were “dressed to impress” in suits, smart shirts and ties, with ribbons in national colours pinned to the lapel. The most impressive thing of all was that it wasn't just those who'd been chosen to take part in the parades who were dressed in bunad, but those who cheered them on too. Everywhere you looked the streets, bars and restaurants of Bergen were filled with people who looked as though they had stepped out of a history book.

As the processions dispersed to picnic in the city parks and school playgrounds, musicians and singers went off to perform in concerts, and traffic started to move again, as people drove home to parties in their gardens and on their balconies.

I was swept along by the happiness and pride of Norway's National Day. Why can't England celebrate St George's day with such good- natured pride? Or perhaps, with our long history, it is the signing of the Magna Carta that would be a good day for a holiday and a party? Could we ever have a day when all generations, and people from every race and background, celebrated living in Britain, and came together with no-one thought "uncool" to take part?

There is just one big problem of course…. We don't have a national costume!

This article first appeared on http://www.platform505.com/national-day-in-norway/ Subscribe to Platform505 for the latest articles and prizes.