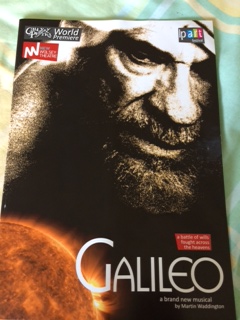 It is often hard for theatre companies, especially amateur groups, to get an audience to come to any unfamiliar production.  All I can say is, if you like a musical with a strong story and memorable songs, well-sung,  you won’t be disappointed by Galileo, a brand new musical by Martin Waddington. The simple set of columns and arcades, with two higher levels, one for the orchestra and one for Galileo’s observatory, framed the action on stage and transported us effectively to Renaissance Italy as we went from 17th century Padua, to Florence, to Rome and the Vatican.

This was the story of science versus religion in an era when the Catholic church, and the Inquisition, were always bound to win. Galileo (played by the ever-professional Steve Taplin,) was the mathematician/scientist who saw the potential of the telescope, using it as a tool to prove his theory of the movement of the planets, thereby falling foul of the cardinals and church doctrine. The financial burden and social stigma of the resulting eight years when Galileo was banned from teaching or writing, fell upon his long- suffering  common-law wife, Marina Gamba (Emily Bennett, singing beautifully) and his daughters Livia and Virginia Galileo (Emilia  Petryszyn and Naomi Doust).  The daughters were flirtatious, the father preoccupied by his work, and Marina had to hold the family together with the help of the housekeeper , Signora Sarpi (Lynne Mortimer).

The show opened with The Centre of All That Is, sung by a cast that oozed confidence with every move and every note. This was a song that combined Latin chants and a modern rhythmic beat, combined in a catchy tune that got our feet tapping.

There were moving songs such as Change in the Wind, sung by Marina, and also some very funny ones: the slightly naughty Marriage made in Heaven, sung by the outrageous Signora Capaldi (Shelley Clempson),  the astrologer brought in to tell the fortune of the soon-to be bride, Virginia, and Family Tradition, sung by Barone and Baronessa Marsilli (Phil Corey and Steph Brown)  her future in-laws, unhappy at their son’s choice of bride.

The Gallery Players deserve their reputation as one of the best amateur companies in the region and has a strong team of actor/singers (playing between them 34 characters in this production) so there was never any doubt that this would be a good show, but director Helen Clarke and her team deserve congratulations for taking on the challenge of a brand new show, and turning it into a triumph.

I learnt a lot about the history of science and Galileo’s role in it and, if this had been a West End production, I would have gone straight to the theatre shop to buy a cast recording!

I also loved the twist at the end, but I won’t spoil it for you: go and buy your ticket. Galileo is on at The New Wolsey Theatre until Saturday 12 July 2014, but I hope other producers pick up on it very soon. We may have got used to modern fast-paced musicals performed by actor/musicians but it was really good to be reminded that a traditionally produced work of quality with no technical distractions – just an unusual  storyline with good tunes – still has its place in the repertoire.