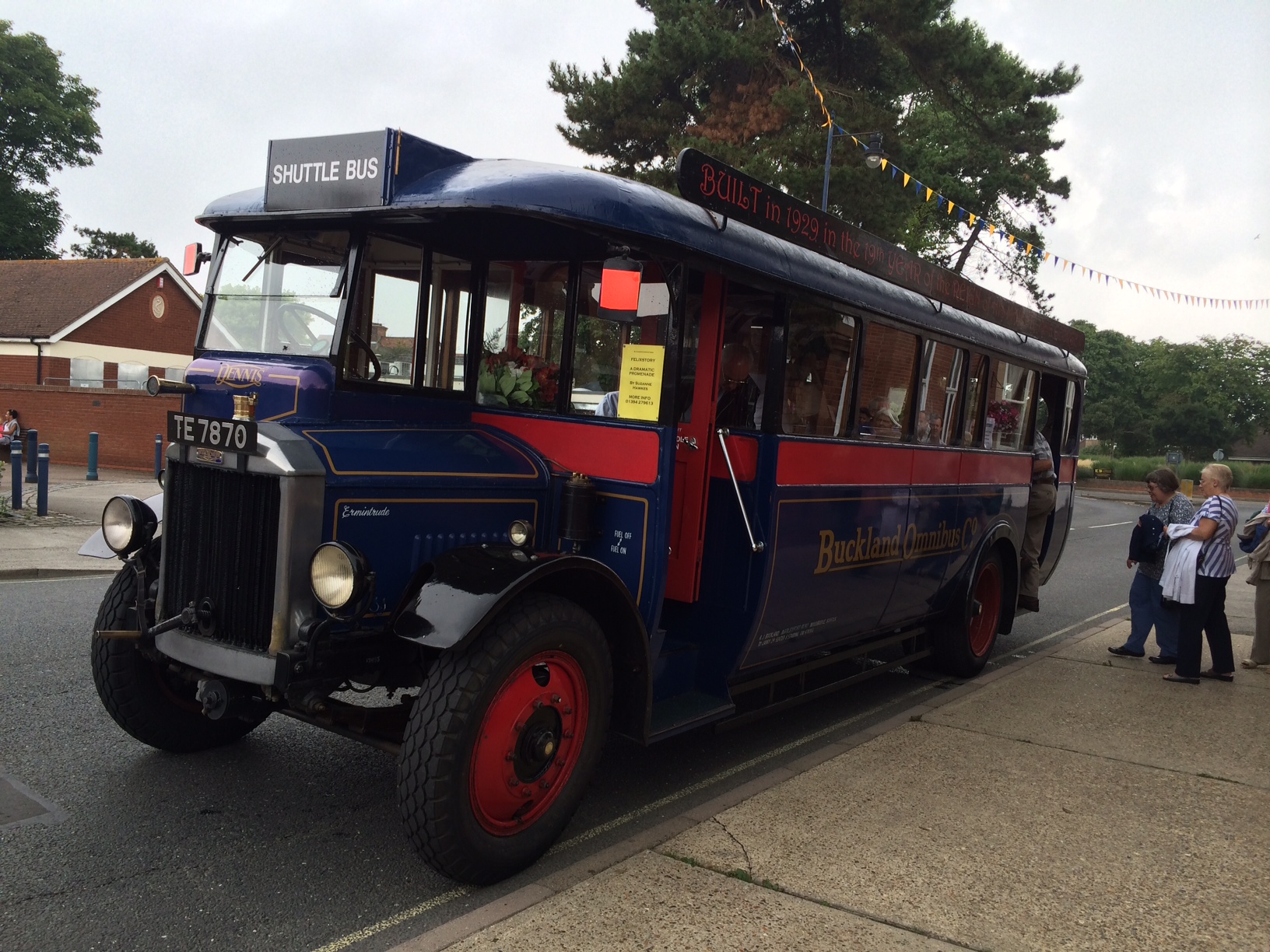 Review of “Felixstory – a Dramatic Promenade”

Usually when you go to the theatre you sit in the stalls while the actors perform on the stage in front of you. “Felixstory, A Dramatic Promenade” by Suzanne Hawkes, the Felixstowe playwright, takes the audience on a vintage bus to meet the actors at locations around the town.

In “His Lordships Library”, the rather grand name for a sitting room at the Orwell Hotel, we drink coffee as we hear Colonel Tomline (played by Nigel Andrews) being interviewed by reporter, Charles Emeny (Steve Roche) about his grand plans to develop Felixstowe, a small village, into a grand Edwardian holiday resort with large houses, hotels and a railway line to serve the town and the port that he also intended to develop. I knew the story of Felixstowe ‘s origins but the story of the Colonel’s bitter rivalry with fellow entrepreneur, Felix Cobbold, over which part of Felixstowe would prevail (Cobbold’s cliff top developments or Tomline’s south end of town), and the fact that he was an irascible bully who fell out with everyone he dealt with, was new to me. As the story was told, gasps and chuckles of recognition ran through the audience when their street or nearby village was mentioned. (This is a play where, to get the most out of the references, it is helpful to have a bit of local knowledge,).

We piled onto the bus with Jack the Guide (Paul Pascall), who told us the odd joke and read us fascinating facts about Felixstowe’s history (an effective way for Suzanne Hawkes hours of research, to be utilised).

In good spirits, we alighted outside at the Spa Pavilion, where we were entertained by the Seasiders Pierrot Troupe and then turned to see John Betjeman (James Marston) sitting in a deckchair, reciting beautifully the poem he wrote about Felixstowe. Walking a short way along the promenade, we were joined by various day-trippers, intrigued by what was happening (and a couple ended up as “stowaways” on the bus, not realising they needed to buy tickets!)

In the shelter at the bottom of Bent Hill, writing a letter and bemoaning her plight, stuck in a town she hated as she waited for her divorce, so that she could marry the King, was Mrs Simpson (Jayne Lindell). This was a lovely gentle under-stated performance that gained the hated American real sympathy from the watching audience).

We walked on to hear about the building of the Bartlett Hospital and the nurses who, shockingly, bathed in the sea nearby from a donated beach hut. Then to Felixstowe Town Hall to meet a Felixstowe war hero, James “Dougie” Davey (Michael Meredith) and the Suffragettes, Hilda Birkitt (Stephanie Stoddart) and Florence Tunks (Heather Price), about to stand trial for burning down the Bath Hotel. This was a passionate performance, with much shouting from Hilda and Florence’s supporters and, in the small “courtroom” at the Town Hall, was perhaps rather too loud and over-whelming.

Back on the bus we journeyed on to Landguard Fort for tales of the soldiers who were based there, the development of Radar at nearby Bawdsey Manor and war time songs performed in harmony, by the FELIX Sisters, before returning by bus to The Orwell Hotel.

This production was a clever idea and the organisation involved must have been very complicated, getting the actors (who played many parts, with some quick changes of costumes) jumping ahead by car, to be in position to greet us when we arrived. It also cannot have been easy getting permission to use the relevant locations especially as Felixstory, A Dramatic Promenade has four performances per weekend, 16 in total.

With some previous knowledge of the basic geography and history of Felixstowe, the experience of this promenading play is enhanced, especially as the stories are not told in chronological order. This knowledge does also mean that it is slightly frustrating to be hearing about the Bartlett Hospital in front of a beach hut near Bent Hill rather than a few hundred metres back along the promenade in front of the real thing… and we could have met Mrs Simpson near the location of the house she rented. I do understand that the resulting longer walk or bus journey would have meant the play (around three hours long in total) would have been even longer.

Thanks to sponsorship by Touching the Tide and The Heritage Lottery Fund,  Suzanne Hawkes and Black & White Productions have created an original and enjoyable experience, and given us a little history lesson about one of Suffolk’s biggest towns.