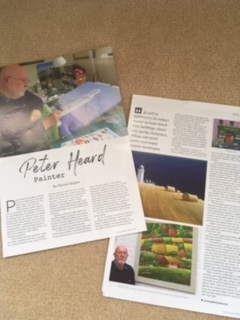 Peter recently celebrated his 80th birthday and was delighted when a surprise family gift was a flight over Cornwall, to see his lighthouses from above. With most of his painting featuring a vapour trail across a vivid blue sky, perhaps Peter could imagine that he was responsible for one of his own that day!