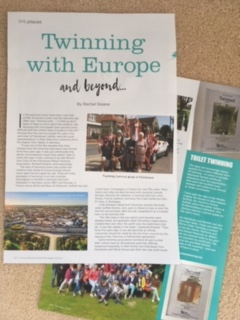 Twinning with Europe… and beyond

In the past twin towns have had a very high profile. Drive into a town and the welcome sign often says “Twinned with….” In 2019 we don’t seem to hear so much about the initiative. Has twinning with a European town become more difficult with the current state of politics in the UK? Missing from the carnival parade this year in my own town of Felixstowe, Suffolk, were the usual representatives, in their distinctive costumes and a fire engine, from Wesel, in Germany.

“It was one of the few parades they have missed since the twinning association was formed forty-five years ago. It was just unfortunate that family circumstances meant they weren’t able to come this year. It was nothing to do with Brexit!” Vice Chair of the Felixstowe/Wesel Twinning Association, Richard Holland, said reassuringly.

The idea of twinning towns was a post -war initiative that aimed to ensure Europe should never again be torn apart by war. There are many examples of twinning in our two counties. Sheringham in Norfolk is twinned with both Ottendorf in Germany (since 1987) and Muzillac in France (since 2004) and Bury St Edmunds, Suffolk has had a twin town, Compiegne, in France, for over fifty years. Many town and cities are also twinned with countries outside Europe. Norwich, for example, is twinned with four cities, Rouen, France, Koblenz, Germany, Novi Sad, Serbia but also El Viejo, in Nicaragua.

Links between Wesel and Felixstowe started informally when Suffolk firemen, who went to Wesel to help re-start the first fire service there, after the war, suggested it as a suitable town to be twinned with.

“The rifle clubs in the two towns soon became were already linked and gradually other Felixstowe organisations created their own links, the yacht club, the badminton club etc. It was like ripples in the water,”explained Richard. “Then, forty five years ago, it was decided that an official connection should be made by the two town councils by
the signing of the Twinning or Partnership agreement.”

Some twinning associations fundraise all year so that their visitors have an all-expenses paid trip, offering reciprocal hospitality in their homes, but individuals from Felixstowe and Wesel always pay their own way, both travel and hotel costs.

“We do fundraise but it is so we can lay on a welcome dinner and perhaps a coach to London for our Wesel visitors,” Richard explained. “One myth is that we fundraise so local councillors can have a free holiday – which is definitely not the case and never has been!”

Compatibility isn’t really a big consideration for many twin towns. Felixstowe is linked to Wesel, which is on the River Rhine, has a cathedral, and is twice the size of Felixstowe. It was decided that, unlike many towns, Felixstowe would only twin with one country, although after unification, German towns were encouraged to twin with towns in the former East Germany and so Felixstowe shares the twinning of Wesel with Salzwedel, in East Germany, and has a separate twinning committee for that link-up.

Although local schools are not involved, young people who attend Level Two, the youth centre in Felixstowe, have visited Wesel and the German fire cadets are also very involved, and Richard is pleased that, having watched families grow up in the two towns, members of the next generation are interested in continuing the friendship.

Ten years ago, some of the Essex and Suffolk twin town associations joined together to form a Twinning Congress which is in contact with 40 community groups as members. Their spokesperson, Mary Dunk explained,

“The Congress is a source of advice on issues such as public liability and data protection. We meet once a year in different locations in the two counties and talk about fundraising and how funds are used. Our next meeting will be hosted by the Haverhill and District Association on October 12th. Subjects cover travel, hosting visitors, and how to spread the word about the benefits of twinning, such as encouraging the take-up of languages, and awareness of everyday life over the Channel.”

Mary is also involved with the twinning association for her own town, Sudbury in Suffolk. The town council there is twinned with town councils in France, Germany and Denmark.

“Sudbury Town Council signed Charters formally twinning with the town councils of Höxter in Germany, Clermont in France and Fredensborg in Denmark. A Council grants goes some way towards supporting our work. Trips are not a holiday as such, as members always know they are going to return the hospitality received, when it is their turn to look after a family on the return visit. Several local organisations get involved with the twinning, and arrange their own exchange visits, such as the Sudbury choir and the Danish choir who have joint concerts, the youth teams of the football clubs holding tournaments, and so on.”

But will Brexit and the UK’s relationship with the EU affect the future of town twinning?

Richard Holland, in Felixstowe is confident about the future,

“Earlier this year I was asked to write an article about Brexit and Felixstowe for the Wesel newspaper and the editor asked that very question,” he smiled. “My reply was that we were linked before we were part of the EU and will continue in the future whatever happens. The friendships between towns will continue.”

“The Essex and Suffolk Twinning Congress is a loose association, representing all political opinions, and is a-political. Twinning associations are one of the few places where you can have a sensible conversation about Europe, with no jingoism. We are all determined to carry on and expect that interest will actually pick up. There are so few ways to get to know locals and to participate in other people’s lives and how better than to live in their homes, shop and cook together and meet their neighbours.”

The signs are increasingly being spotted for a rather different form of twinning – in toilets! A proudly displayed framed certificate announces that the organisation who owns the facilities have twinned with toilets in an African or Asian community. I have seen the sign in the Whelks Copper Tea Rooms in Sherringham, Norfolk, the church in Kersey, Suffolk, and in the Ladies toilets at St Edmundsbury Cathedral. (For obvious reasons I cannot speak for the men’s’ loos!).

As individuals and families can also twin their toilet, I have now paid my £60 to Toilet Twinning, a project run by the charity Tearfund, and have chosen Myanmar as where I want my twinned toilet to be, and I have received my certificate. The charity has provided 35,000 latrines in 40 countries -and now one of them is mine!
https://www.toilettwinning.org